Dr Gabriel Serrano was the first scientist to publish the results of his study with 75 patients affected by COVID-19 and successfully treated in February, March, and April 2020.

He had the vision to treat the first patients with lactoferrin, described the action mechanism of the virus and how to activate the natural defences.

Abstract Lactoferrin is a highly multifunctional glycoprotein involved in many physiologi-cal functions, including regulation of iron absorption and immune responses. Moreover, there is increasing evidence for neuroprotective effects of lactoferrin. We used Caenorhabditis elegans as a model to test the protective effects, both on phenotype and transcriptome, of a nutraceutical product based on lactoferrin liposomes. In a dose- dependent manner, the lactoferrin- based product protected against acute oxidative stress and extended lifespan of C. elegans N2. Further-more, Paralysis of the transgenic C. elegans strain CL4176, caused by Aβ1- 42 aggregates, was clearly ameliorated by treatment. Transcriptome analysis in treated nematodes indicated immune system stimulation, together with enhancement of processes involved in the oxidative stress response. The lactoferrin- based product also improved the protein homeostasis processes, cellular adhesion pro-cesses, and neurogenesis in the nematode. In summary, the tested product exerts protection against aging and neurodegeneration, modulating processes involved in oxidative stress response, protein homeostasis, synaptic function, and xeno-biotic metabolism. This lactoferrin- based product is also able to stimulate the immune system, as well as improving reproductive status and energy metabolism. These ﬁndings suggest that oral supplementation with this lactoferrin- based product could improve the immune system and antioxidant capacity. Further studies to understand the molecular mechanisms related with neuronal function would be of interest.
READ ARTICLE

A prospective observational study was performed in 75 patients with typical symptoms of COVID-19 who tested positive to IgM/IgG rapid test. Patients were isolated and treated at home using remote systems, reviewed twice a day for 10 days, and followed up to 1 month. A liposomal bovine lactoferrin (LLF) nutritional syrup food supplement (32 mg of LF/10 ml plus 12 mg of vitamin C) was administered orally in 4 to 6 doses per day for 10 days. In addition, a zinc solution was administered at the dose of 10 mg/10 ml twice or three times a day. A control group of 12 patients who took only LLF was included. All family members in contact with patients (256 persons) were also treated with half of this dose. The treatment allowed a complete and fast recovery in all patients (100%) within the first 4-5 days. Same treatment at lower dose prevented the disease in healthy persons directly related with the affected patients. Weakness (95%) followed by a dysfunction in the perception of smelling and tasting (88%), cough (83%), muscular pain (67%) were the most frequent complains. LF possess antiviral, immunomodulatory and anti-inflammatory effects which might be important for the treatment of COVID-19 infection. We conclude that LLF potentially prevent and cure COVID 19 infection.

SARS-CoV-2 uses ACE2 receptors (Angiotensin-Converting Enzyme) for entry into the host cell and the transmembrane serine protease 2 (TMPRSS2) for S protein priming. Lactoferrin is endowed with potent antiviral activity, related to its ability to block viral entry into host cells by interacting with viral and/or cell surface receptors. SARS-CoV-2 uses its spike proteins to invade cells via ACE2 receptor. The ability of free and encapsulated LF to prevent binding of SARS-CoV-2 spike protein to HaCaT keratinocytes receptors was evaluated (fluorescent microscopy) through immunostaining with lactoferrin antibody (Cy3-red) and spike protein labeling with Atto48 (green). Untreated control HaCaT cells incubated with the labeled spike protein did not present any red fluorescence due to lactoferrin antibody staining, but a green fluorescence owing to labeled spike protein was observed. Cells treated with 0.001% lactoferrin showed lactoferrin (red) bound cells although Spike protein (green) was not detectable. % 0.0001 LF did not bind most cells (red), whereas spike protein bound cells (Green), but less than the control without product treatment. 0.001% liposomal lactoferrin (LLF) did not show spike binding signal (Green) and high lactoferrin staining was observed (red). LF and LLF prevented the binding of SARS-CoV-2 spike protein to HaCaT cell receptors although at the same concentration LLF was more effective than the free form. LF encapsulation improves the delivery of LF. The liposome by its own structure and composition interact with lipoprotein components of the virus or from cell membranes (TMPRSS2). Oral administration of LLF may be useful in the care of patients with COVID-19 infections.

Abstract: Severe acute respiratory syndrome coronavirus 2, SARS-CoV-2, emerged in later December 2019 in Wuhan, China, as a new epidemic form of respiratory life treating infection caused by a novel coronavirus. Lactoferrin (LF), a milk protein used as a food supplement has been reported to be effective in vitro and in vivo against SARS-CoV-2 both as a potential preventative or therapy treatment. Lactoferrin or lactotransferrin, is a protein found in cow and human milk with great affinity for iron ions and with a significant role as immunomodulator. It belongs to the components of the innate immune system and is present in several mucosal secretions and in neutrophil leukocytes. Increases in lactoferrin are seen with inflammatory bowel disease but also with other inflammatory conditions, with intestinal bacterial infections, some parasitic infections, and with colon cancer. LF gen and other genes such us S100A9, and Lipocalin 2 are over expressed in patients with SARS which supports that LF has immunomodulatory properties derived from its ability to bridge innate and adaptative immunity. In the present study we analyze the effects of the oral intake of a single dose of 24 mg of liposomal lactoferrin (LLF) in 4 human volunteers on leucocyte gene expression at five times points, before (0h) and 2-4-6 and -24 hours after its oral intake. LLF absorption was measured in blood serum by ELISA and the expression of genes for Lactotransferrin (LTF), Angiotensinogen (AGT), Granulocyte-colony stimulating factor (G-CSF) and Granulocyte-macrophage colony-stimulating factor (GM-CSF) were measured using Reverse Transcription Polymerase Chain Reaction (RTqPCR) on blood cells. Oral administration of LLF increased lactoferrin levels in blood serum and enhanced the expression of LTF, AGT, and GCSF genes while GM-CSF levels remained unchanged. These findings support that LLF activates the innate-immune response and increase our defense system against bacterial and viral infections. 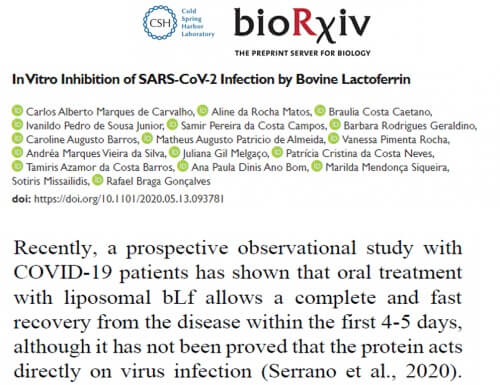 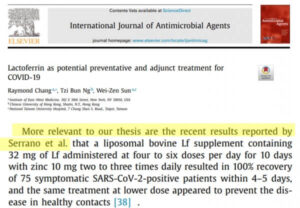